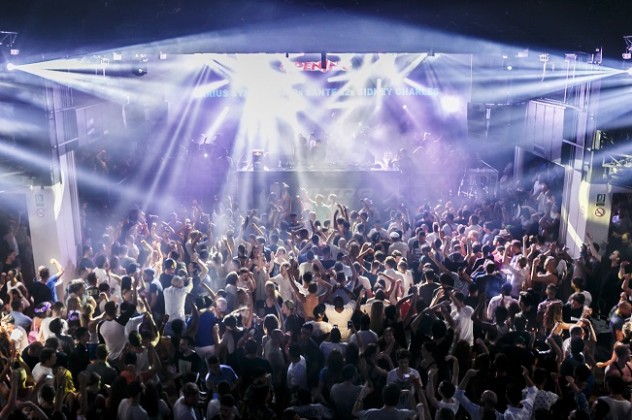 So it starts, Ibiza 2015
The love between Space Ibiza and the island occurred once again. After 26 years of mutual attraction, nothing in the world can break the union that continues to renew their unconditional love for electronic music. Nerves, enthusiasm and above all, the eagerness to party is what the attendees transmitted who approached the Flight Club, a colossus of V-shaped metal with large LED screens attached more than 15 meters high.
The first to climb into the impressive DJ booth was Wally López. The DJ from Madrid opened the season with the force that characterizes him. Stilt performers, dancers and the noise of Foc i Fum bust into his set to encourage the Flight Club the entire night. 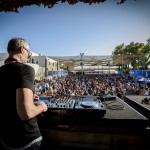 Michel Cleis, one of the main ambassadors of Cadenza arrived when the open air area was well prepared, after a good job from López. His Latin beats sweeten with the House typical of the label, hit it off with a euphoric audience. With the Sunset upon his shoulders, Sasha proved why he is one of the most respected DJs in the world.
The omnipresent Javi Bora and Jose de Divina merged into a single DJ. Their rapport was evident. Between pressurized blasts of smoke and hypnotic lights, the only b2b of the Flight Club exceeded expectations leading to the big moment of the evening.
Then he arrived, Luciano, the headliner of the Space Opening Fiesta with a double set. The boss of Cadenza who will soon release a residency at Space Ibiza, was welcomed with great enthusiasm just as all the biggest DJs deserve. His multicultural electronic proposal received wide acceptance among the audience who danced without stopping until a “see you later”. He said goodbye to the fans just only to see them later again in the Terrace for his second session of the night.
At that time, the Sunset Terrace was already operating for hours. Elrow filled with smiles, color and a sigermorning attitude on this corner of Space Ibiza. Mario Biani and George Privatti started the rower show with a great b2b set. The clubbers who packed the dance floor testified that there was a good party going on there. Behind them, Toni Varga, De la Swing and Marc Maya, each in their respective sets, completed the message of the boys from Viladecans. 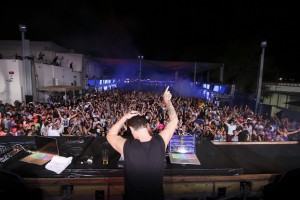 At 11pm it was time for the young Ibizan DJ and producer of Vallès. Inspired by the French-touch of the late 90s and the funk of the 70s, he gave free rein to their imagination to bring us a set out of the ordinary. The trendy duo coolMachines took to witness, showing signs of their extensive knowledge of the current underground scene and presenting to the audience the legendary Jonathan Tena. Aphotek went on after him to give the final push to those present at the Sunset Terrace. He owned and mastered the dance floor from 4:30am until closing.
Meanwhile, El Salón proved why it was the most eclectic space of Space Ibiza. When midnight came, the magic of this room began to flow with the careful selection of music of Juan Gómez, Igor Marijuan, Yan M!kale, David Moreno and Elio Riso. They created a welcoming atmosphere where the proximity with the public was the most notable feature of their sessions. The audience were the most notable feature of their sessions. 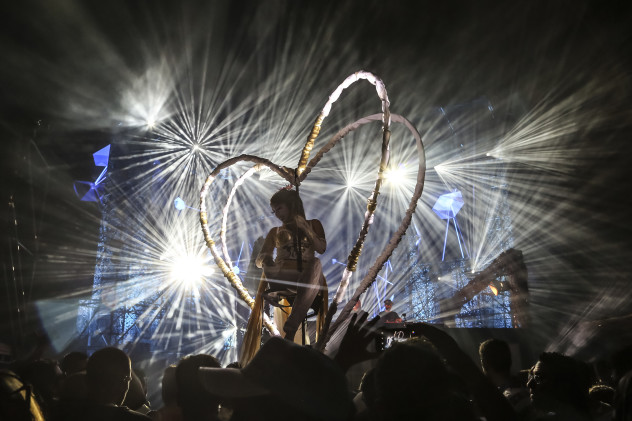 The Main Room, a favorite dance area by the audience at Space Ibiza, opened at 10PM with DJ Mykris on the decks. With an energetic personality, he is considered to be one of the artists to watch this season. After him, it was time for Coyu. The Catalan elaborated a final session that identifies him, making the most of the powerful Funktion One system of the main room at the club in Playa d’en Bossa.
Then it was clear for the b2b of the main room of the club to start. The first to share turn tables were Technasia and Pleasurekraft. Kaveh Soroush and Kalle Ronngardh knew how to perfectly come together with Charles Siegling. The visceral and deep sound of the Swedish attached to the French know-how resulted in a memorable session.
The triple b2b of Darius Syrossian, Santè and Sidney Charles was swift but worth it. They carried the room on wings with their Berlin House sound. The pressure to close the Main Room on such an important day did not affect them, they managed to make the audience enjoy making them part of their music culture.
The Premier Etage showed the condition of Space Ibiza. Worldwide recognizable by its yellow tubular sofa, offered a 100% Eivissa ambiance. DJs as legendary as Marco Loco, Mr Doris, the always consistent Ramón Castells and the great Paul Reynolds, gave their all to this magical place remained true to its essence. 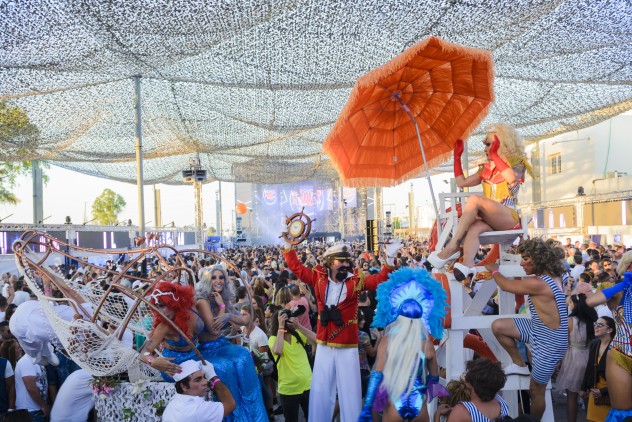 As every year, since 26 years ago, the Terrace of Space Ibiza was dressed for the occasion to welcome one of the most promising seasons in recent memory. This corner of the world became a museum of sound for electronic music, nothing was held back in the hall.
Blackhall & Bookless opened the dance floor to visitors, starting the festival which we would live for the following hours. Before we knew it we were with the British Groove Armada. Famous for their particular form of production, they perfectly reflected their artistic concept with strong bass and catchy rhythms. Perfect prior to the arrival of Luciano. The world’s most famous vagabond, put all his years of experience into his 2nd set. Organic House without limits or pre-established concepts, music set man free until about 4am.
The b2b set by Cesar Merveille and Ernesto Ferreyra did nothing but raise the temperature of a room to insatiable musical experiences. The reunion with Los Suruba increased the sound voracity for all clubbers. The Spanish duo who is dominating more covers in these early summer days, showed why their names are popping up at all the festivals of the world. The final set of #SpaceOpeningFiesta fell on the shoulders, or rather said, the hands of Edu Imbernon. The emerging figure from Valencia knew to soak up the atmosphere to star in a dynamic set that ended a great night to the light of day.

Just like every year, the summer in Ibiza has premiered. This is just the beginning… the party continues at Ibiza. Tonight is Cocoon Ibiza opening and tomorrow Richie returns…